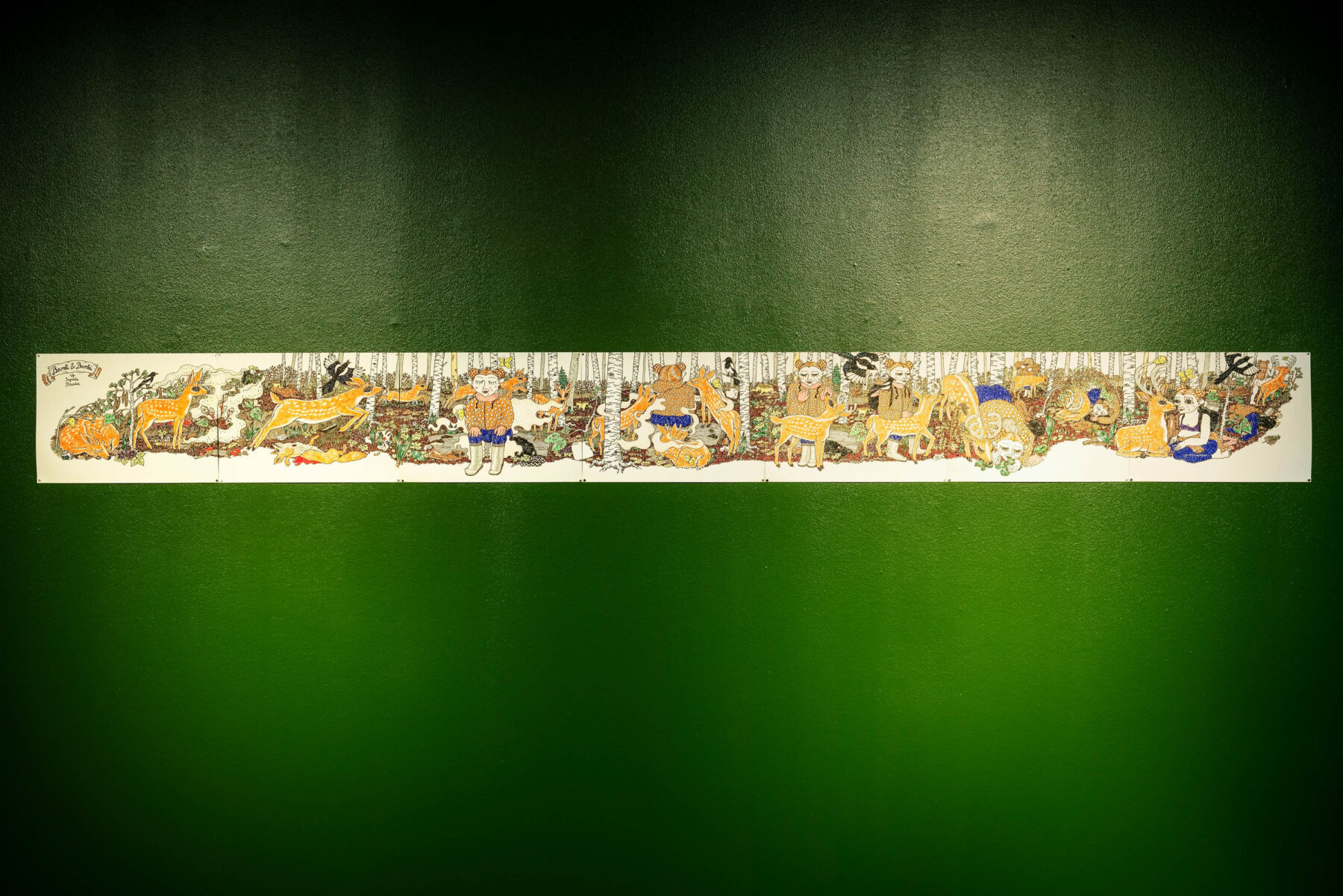 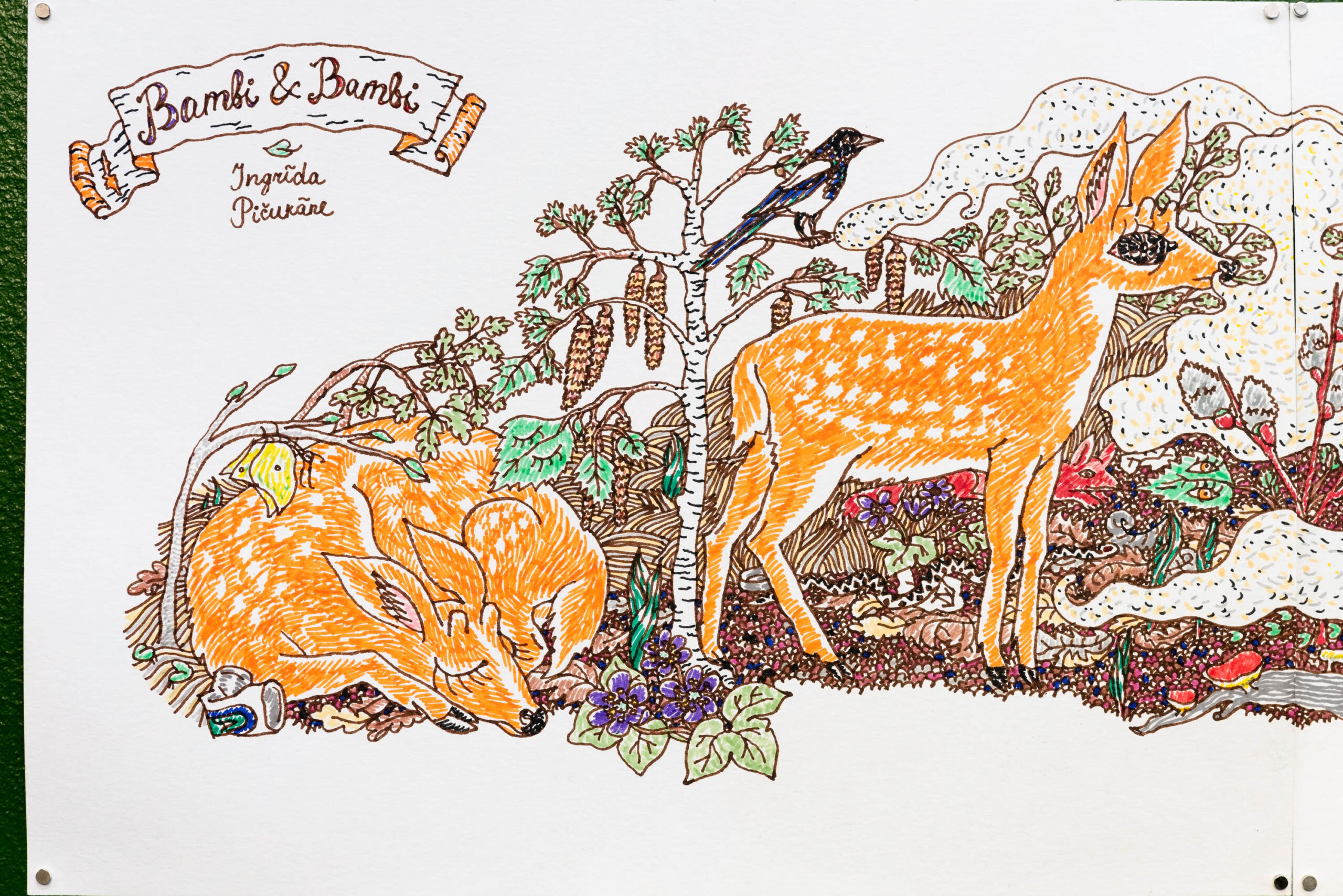 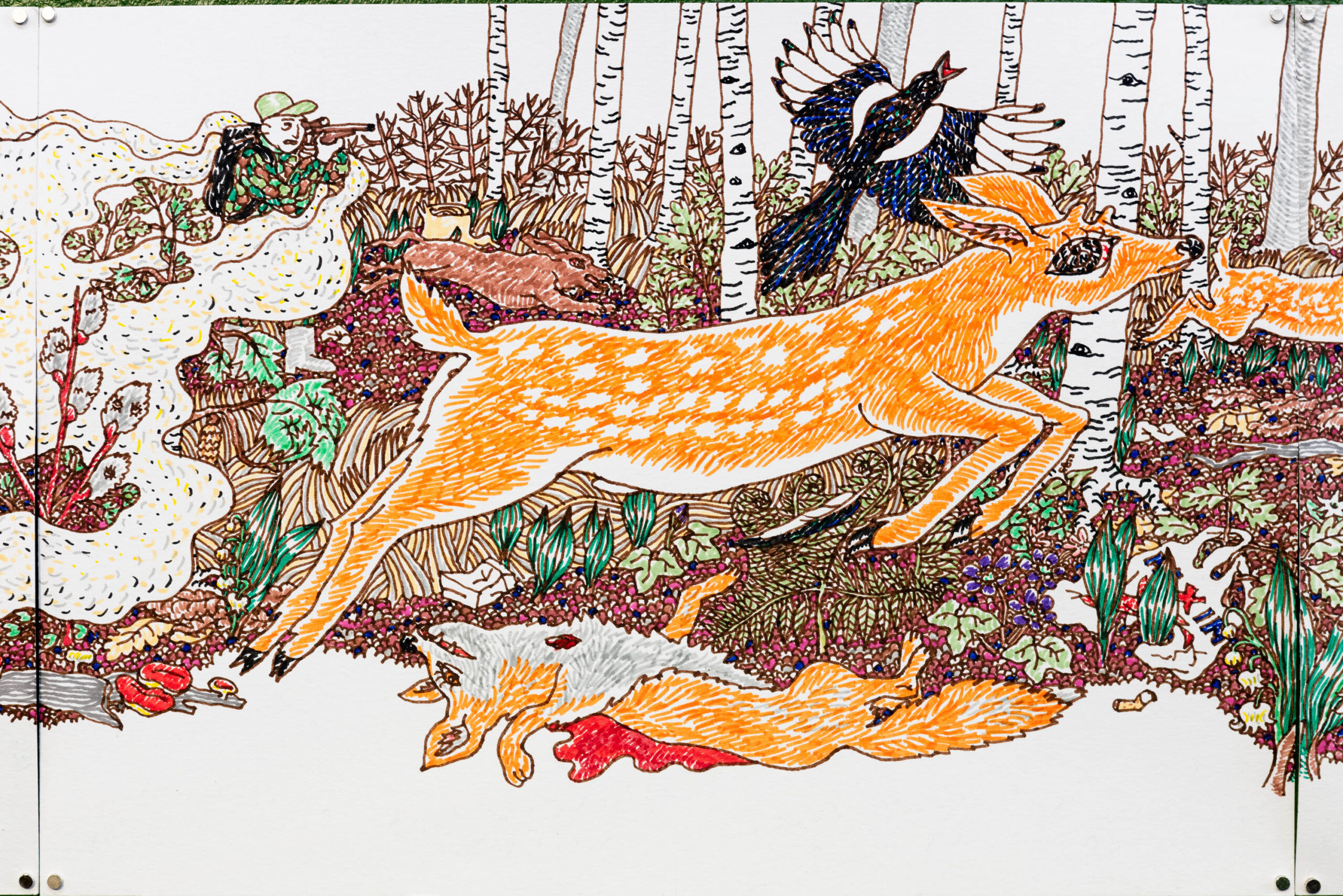 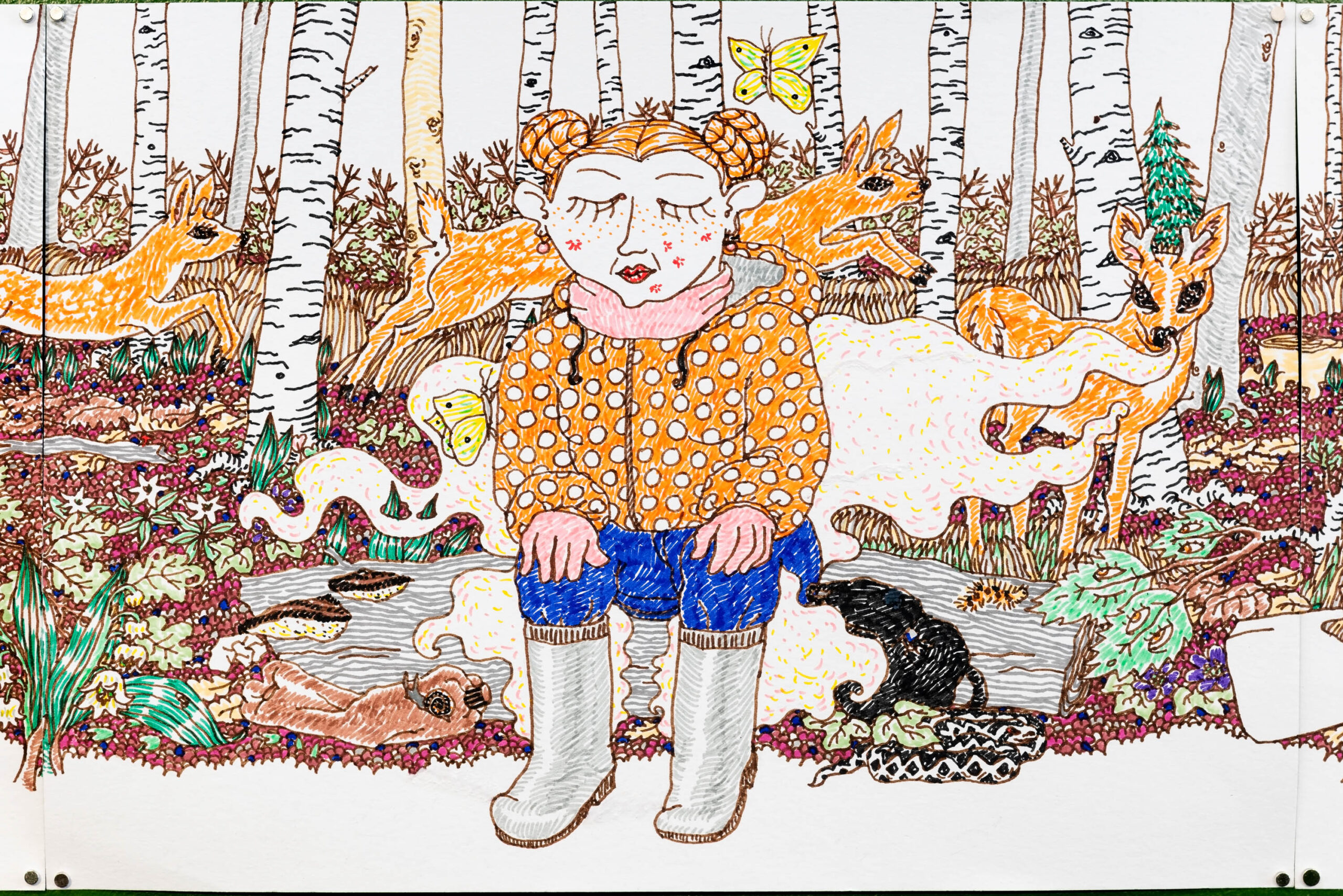 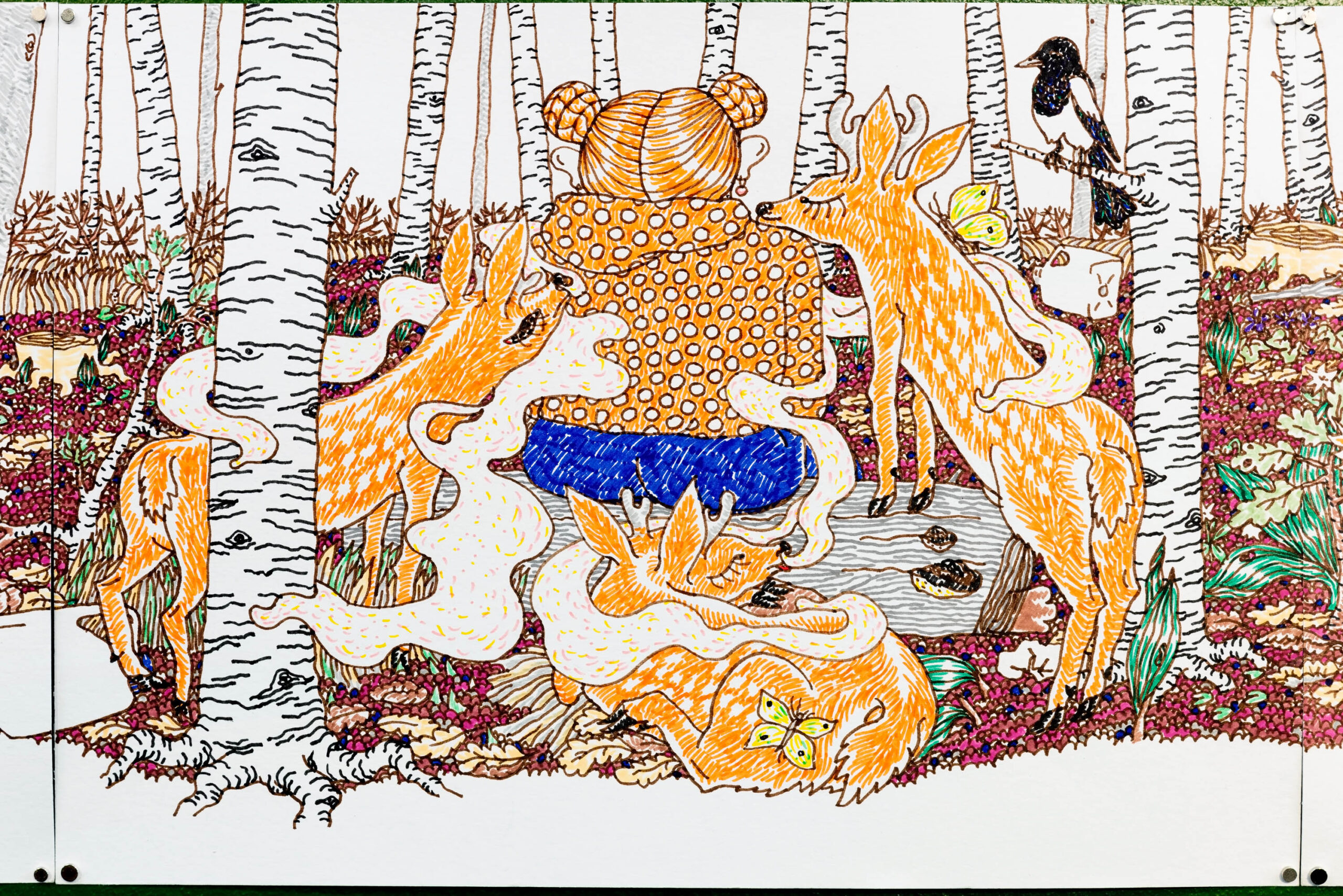 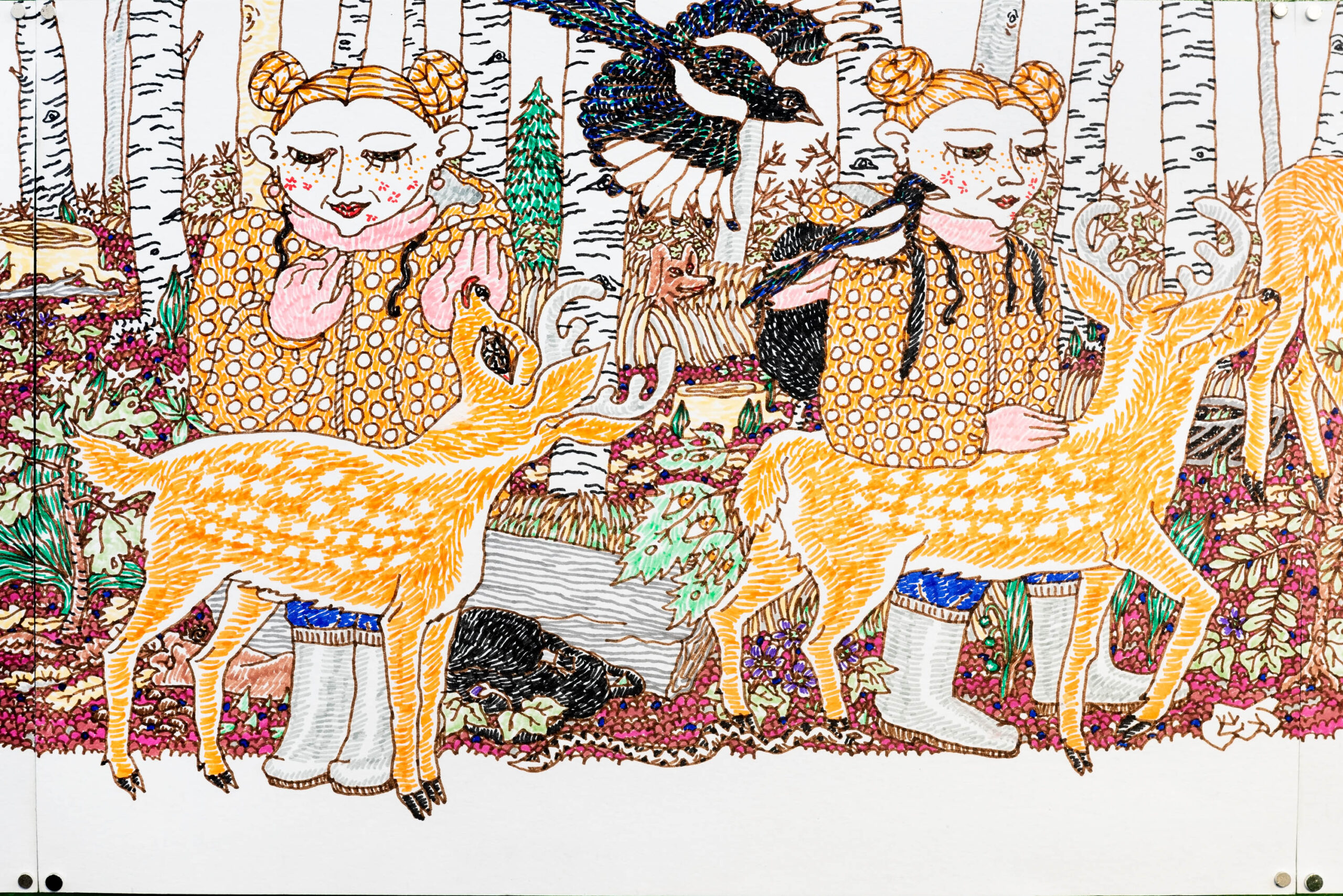 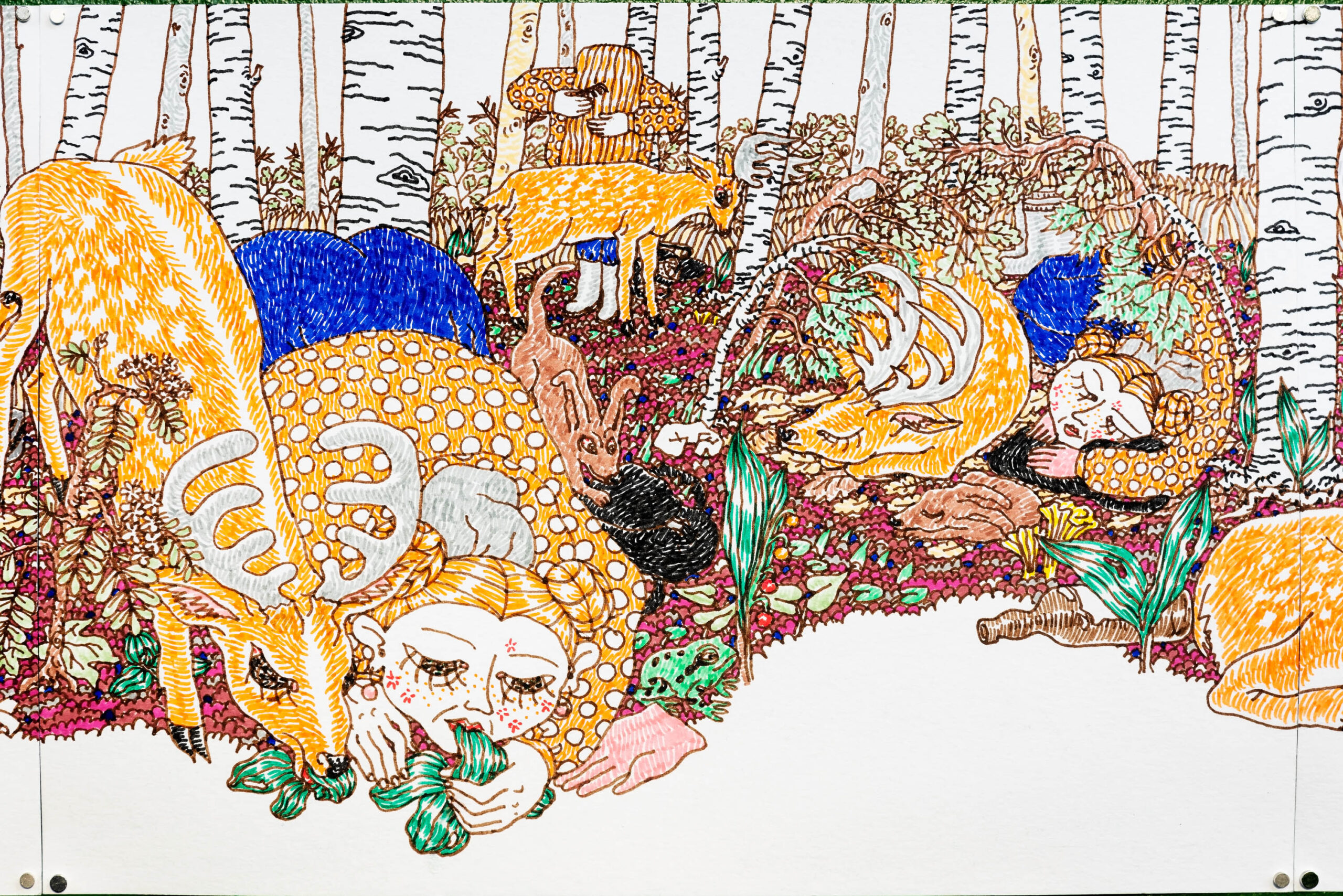 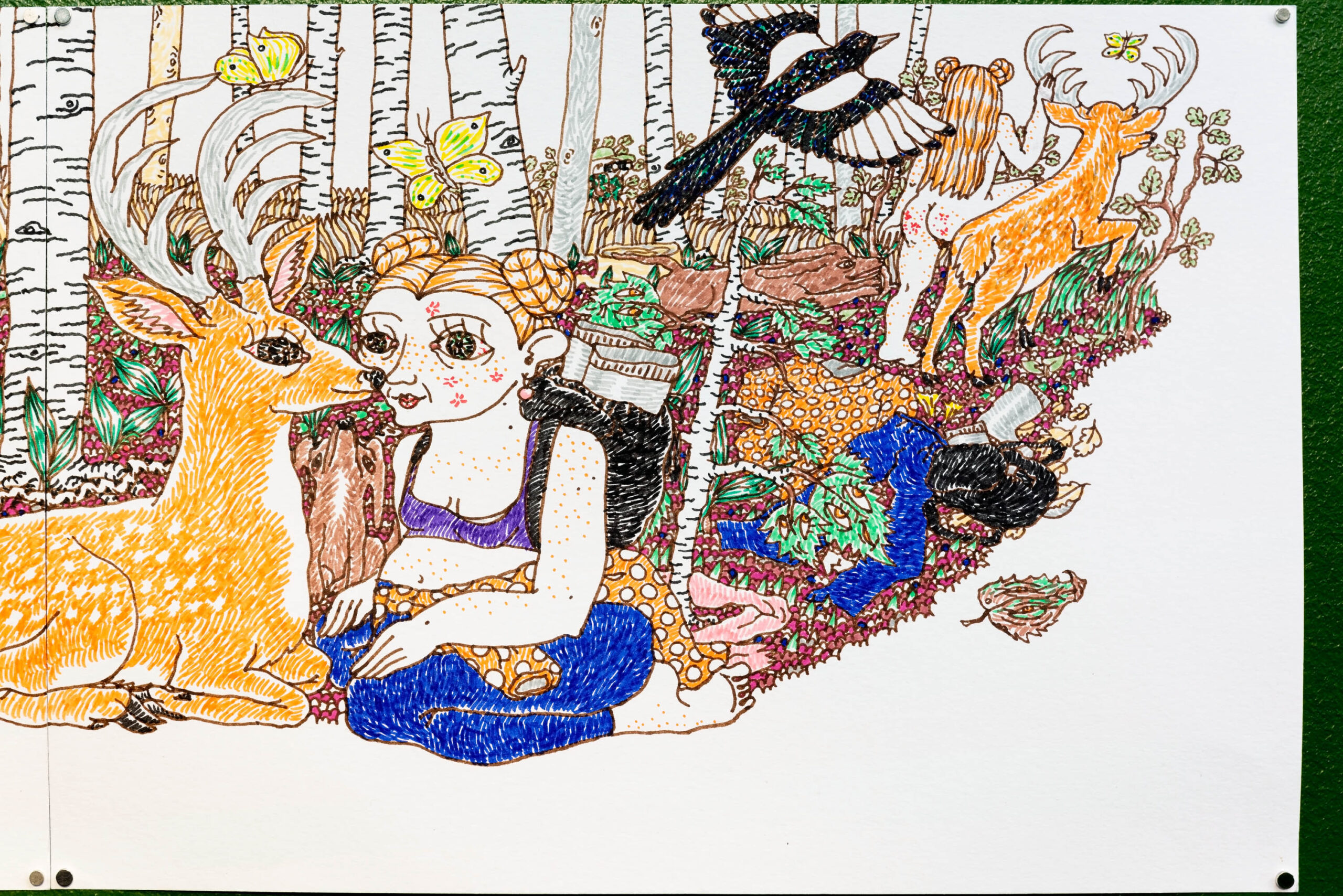 Work from a group exhibition “The Bambi Project“.

Then Marena spoke, the young half-grown doe. “They say that some time He’ll come to live with us and be as gentle as we are. He’ll play with us then and the whole forest will be happy, and we’ll be friends with Him.” (Salten, p. 98)

Salten’s book, but especially the Disney animation, has been criticized for depicting mankind in a negative light, sending out mixed messages about any possibilities for a peaceful coexistence between humans and other life forms. Ingrīda Pičukāne is trying to blur the lines between human and animals through her comics in order to reconnect with nature. As a feminist artist she is interested in questions of gender identity and how these are linked to the human relationship with nature.

In the book and the movie, animals have several traumatic encounters with ‘Him’ or the male hunter that is killing them and spreading fear in the forest. Pičukāne’s visual story tells of Bambi’s meeting with a woman who has come to the forest to meditate and visually looks very similar to the young deer. The story continues with the two similar looking species bonding and eventually becoming friends. Pičukāne’s work includes social critical messages about 21st century society that still lives in a very binary world with socially determined behaviour patterns taught to women and men. It’s no coincidence that women tend to be the ones that dedicate themselves more to nature protection and veganism, while men are more common to be car users, animal product consumers, hunters and polluters. In this regard, it seems that since the book was written nothing has significantly changed. Bambi & Bambi is dedicated to the hope that there is hope for change in the human relationship with nature as well as with each other.

Ingrīda Pičukāne (1978) is a feminist artist who focuses her art on the analysis of the female perspective. She is interested in women’s everyday life and stories ‒ personal histories that are so often omitted. Pičukāne holds two MA degrees, one from the Department of Animation at the Estonian Academy of Arts and the second from the Department of Visual Communication at the Latvian Academy of Arts. Since 2007, her comic strips have been regularly published in the š! comic anthologies and shown at comic exhibitions abroad. The artist designed the Beautiful Mothers book by Jana Kukaine and illustrated a number of children’s books published by the “liels un mazs” publishing house. Pičukāne is the editor and artist of the Samanta zine (first issue published in 2017).